The Guys Behind the Scenes of Spanish Fly

“Jose  was all about sharing the fishing experience.” -Mike McKinnis, Co-Producer of Spanish Fly, and Director of the Jose Wejebe Spanish Fly Memorial Foundation

I always claimed we had “front row seats” to the greatest show on earth. That show was the “The Spanish Fly!” Every trip was a dynamic display of talent, art and comradery, led by the one and only Jose Wejebe. Jose was a dear friend and partner to our company, JM Associates, and though I know he appreciated what we did together as a team, we could never repay the joy and excitement he gave us through his journeys across the globe. There were indeed many.

We called one of his more memorable adventures the “Trip of Firsts,” an eight-day excursion several hundred miles off the coast of Australia into the Coral Sea. Living aboard the mothership Odyssey of Capt. Damon Olsen’s Nomad Adventures, Jose’s desire to experience all that marine life had to offer took us to “Frederick Reef.” 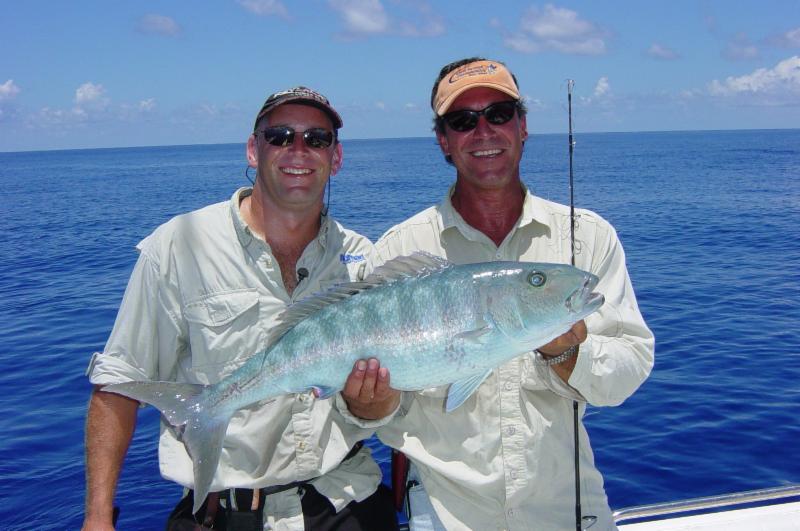 Jose would indeed experience many firsts on this trip, including shaking hands with Bluefin Trevally, Jobfish and his ultimate goal of the trip, a big Dogtooth Tuna. The five episodes we captured would turn out incredibly entertaining and showcased this part of the world like no other.

They would include all of the fly and light conventional tackle that Jose could throw at them, and of course included what we call a “Spanish Fly moment.” Jose hooked a Sea Bass on a spinning rod and the fish got stuck in the coral … and what did he do? That’s right, he stripped down to his skivvies and dove in to catch the creature with his bare hands, a signature Jose Wejebe move. 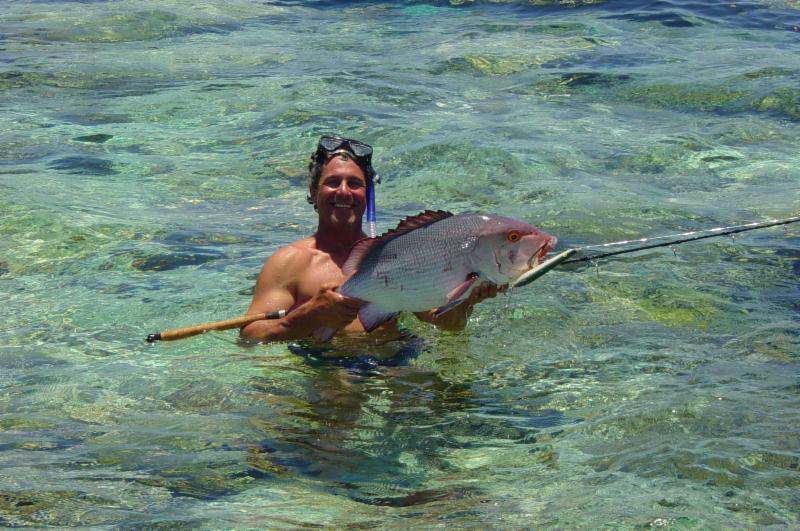 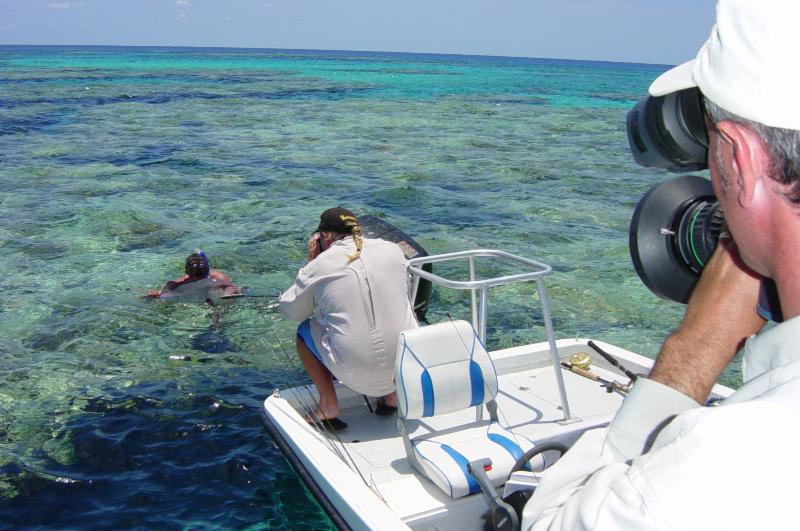 There was one behind the scenes moment that wouldn’t make any of the television shows, but will stay near and dear to my heart for as long as I live. As I said the ultimate goal for Jose was to catch a big Dogtooth Tuna, and we would do just that . . . literally we!

On the final day of shooting, Jose had caught a few Doggies, as they’re called in Australia, but we hadn’t caught the big one he wanted to highlight the Dogtooth show. So we were out in the 36′ Sportfisher, getting all the extra footage to cap off the show. Tight shots, trolling shots, casting shots, underwater shots, but all the while hoping we’d latch onto a big Doggie.

Well the day was getting long and we had gotten all that we needed, including a few 40- to 60-pound doggies. Capt. Damon had exhausted all of his best locations trying to get the big one to no avail. So in typical fashion on a Spanish Fly shoot, Jose would call a last hour “Crew Hole,” where myself and the camera crew would drop equipment, and pick up equipment — fishing equipment, that is. 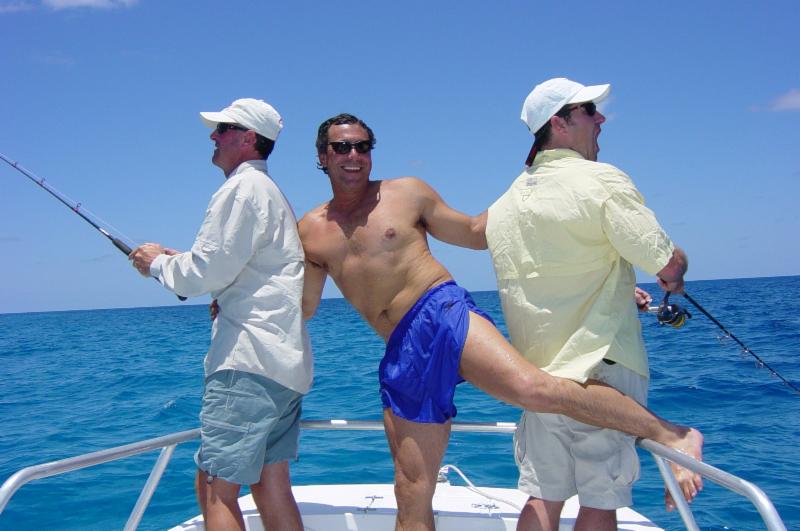 The production crew getting some time in

Capt. Damon was to give us one long drift across his best ledge to see if we could catch one of the big Doggies. Wes Miller, Tim Schick and I each picked up one of Jose’s sweet Shimano spinning rods equipped with a butterfly Jig, and we started jigging. Dropping it down about 65 feet and jigging it up. Drop it down … jig it up!
Typically our “crew holes,” which we enjoyed only after accomplishing what we needed for the shoot, were full of action. These were always the best of times as we caught fish after fish while Jose would either jump in the water and shoot underwater shots or, my favorite, he would be our personal guide, changing lures or bait and helping us land our fish. What a treat to have Jose Wejebe as your personal guide!

So anyway, there we were dropping it down, jigging it up, starting to get a little bored and tired with this crew hole. We were at what would normally be our last 20 to 30 minutes of good daylight to shoot in. Jose as usual was sitting back enjoying the moment as we continued. Drop it down, jig it up.

And then it happened. BOOM! And it happened on my rod! If you’ve never felt a big fish hit a butterfly jig, there are two possibilities. One is they’ll hit it when the jig is fluttering down toward the bottom. The other possibility is they hit it while you are pulling it toward you. That’s the one that got me. It almost took the rod out of my hands.

I yelled “I got one!” Capt. Damon saw it from above and immediately screamed, in his heavy Australian accent, “That could just be the one you were looking for Jose!” We all looked at each other … and without a whole lot of ballyhoo, made the quick decision to capture this for the show! Tim and Wes quickly reeled in, dropped the fishing equipment in exchange for the camera equipment. I handed my rod to Jose and grabbed the audio gear. We all fired up and off we went, Jose battling this big fish not knowing exactly what it was going to be.

This is where it picks up on the Spanish Fly television episode — Jose locked into something big. After several minutes of tug-o-war, Capt. Damon says “This could be a Doggie, a GT (Giant Trevally), or a shark and really … I can’t tell ya.”

Whatever it was it was certainly a lot bigger than the previous smaller Doggies Jose had caught. We were all on the edge of our “front row” seats, waiting to see what monster might arise. Then one more pull from Jose and it becomes visible. Damon yells “Holy #%&@, it’s a doggie! Look at the size of that thing. It’s a Dogtooth Tuna!” 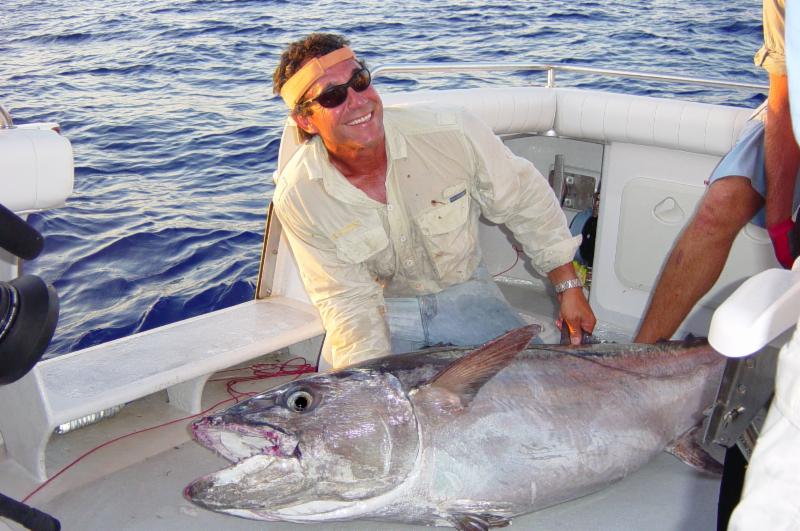 The next five minutes was a display of excitement that would surely rank in the top 10 all-time Spanish Fly moments. Jose pulling this 78-kg Doggie to the back of the boat (172 pounds for us domestic readers), hearts pumping, guides screaming, bringing it aboard, snapping a few pics, releasing it back into the ocean . . . and to think we almost gave up on catching one of these beasts!  That show ends with Jose having caught many firsts in his life and capping the trip of a lifetime with the fish of a lifetime, this giant Dogtooth Tuna.
Now here’s the thing that made that so special for me. In the world of sport fishing, much is made of catching the biggest fish or landing the most. Our competitive nature keeps this at the forefront of our fishing adventures. Many have taken it a step further, and now there are tournament competitions and record books that keep track of who, what, when, where, how big, what tackle, etc.

Jose was never much into that kind of thing. He was always about sharing the moment, releasing the fish and shaking hands with friends. I never witnessed Jose measure or weigh a fish … ever! Whether he was with a friend or with his entire television viewing audience, he enjoyed sharing that moment more than anything else. 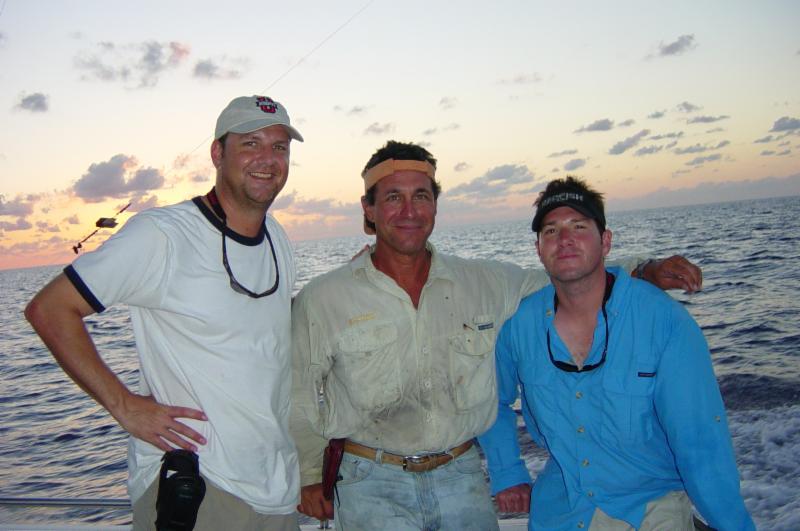 So after much laughing and joking with Jose about how he had help catching his doggie of a lifetime, (see competitive nature above), he pulled me aside and told me how much more that fish meant to him because we caught it together. Thank you, Jose, for teaching so many of us how to enjoy the moment and share with friends. Peace my friend …